Thank you for contacting us through our website.  You wrote:

“I have a well. Recently I replaced my hot water tank. Shortly afterwards I began to get the rotten egg smell on the hot water side. As I understand it, the anode rod in the tank is reacting with the bacteria in the water. I do not want to remove the sacrificial anode rod and have heard that a UV filter will placed between my water softner and my hot water tank will take care of the odor. I need to know if the investment in this type of filter will be worth it”

We do not believe a UV system would eliminate hot water odors, and we wouldn’t recommend that you go that direction.

For the most part, the odor builds up in a water heater over time with hydrogen sulfide and bacteria, often in conjunction with a decaying anode rod.  Since you don’t want to change out or remove the rod, you may very well need to sanitize and disinfect the whole tank.

If you decide to try to work with the tank you have and just need a way to chemically sanitize it, we offer our Easy Water Heater Odor Killer Kit: 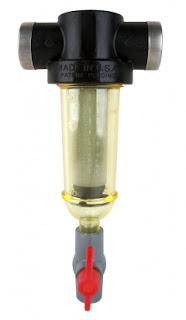