Need Help with Rotten Egg Smell but Do Not Want Chlorine

My question has to do with smelly water.  Our well water smells bad (rotten-eggs) in the cold water, and its worse in the hot water.  I prefer not to use chlorine, is there some of aeration tank I can use?

Our home has two bathrooms, 4 people.  Our well water is good except for smell.  We don’t get rust stains like our neighbors.  When we purchased this place it was tested and no bacteria was present and water is supposedly safe to drink, it just smells terrible.  Thank you.

Thanks for emailing.  You don’t have to use chlorine to get rid of odor.  One alternative way that is very effective is to inject automatically hydrogen peroxide and then filter the water with a Sulfur Air-Charger Catalytic Carbon Filter System.

This type of system is completely automatic and there are not filter cartridges to change.  The only routine maintenance involves adding some hydrogen peroxide to the solution tank every few months.

Smelly odors are a common problem in well water systems.  They are generally caused by hydrogen sulfide (H2S) gas, which can get into water sources in a number of ways: via sewage systems, near coal and peat deposits, in oil fields, and most commonly from iron and sulfur bacteria. 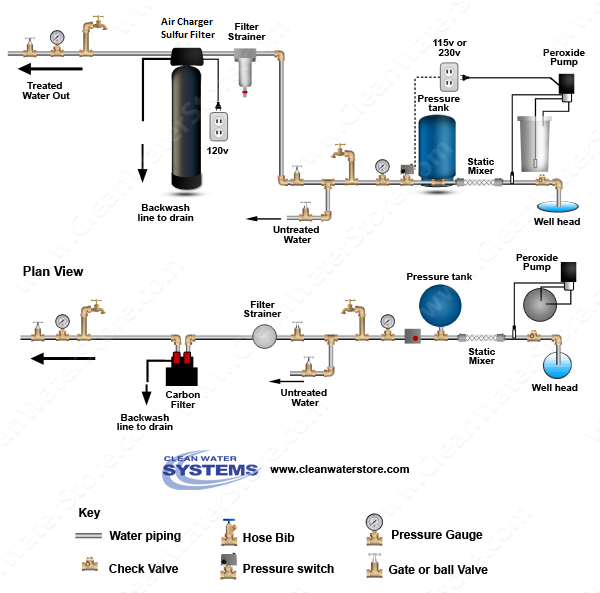 A combination of hydrogen peroxide injection (or chlorine) combined with aeration and filtration with catalytic carbon does an excellent job to completely eliminate these odors and produce crystal clear water with no chemical residual.

These systems are automatically backwashing, meaning the media inside is cleaned every 1-2 nights, prolonging the life of the media and providing the air used for oxidation.

This is an automatic backwashing system that rinses out the media about once per week in order to keep the media clean as well as maintain a head of air for the oxidation purposes.  Unlike other Air Charger systems this valve doesn’t need to do a full backwash every night, rather this simply does an automatic suction to replenish the air-pocket.

An optional Spindown filter should be installed upstream of the backwashing filter so as to protect against sand/sediment from entering the control valve and cause unwanted problems.

You can also use this to shock the filter/house with Bleach or Peroxide from time to time as will help with odor buildup as well as improving the filters cleanliness and longevity.

The Spindown filter uses a mesh screen thus no filter cartridges that need constant servicing.  Simply flush the valve for 10 – 20 seconds about once a month or as needed and done.

The following will show images, a brief description of each, system cost, warranty specifics, along with product links for more information.


I hope this information helps and finds you well, should you have any questions or require additional documentation simply let me know.  Thanks again for contacting us to treat your water, I look forward to hearing from you.

I hope this information helps and finds you well, should you have any questions or require additional documentation simply let me know.  Thanks again for contacting us to treat your water, I look forward to hearing from you.