How to Remove Sulfur Odors Without Using Chlorine

Can I remove sulfur rotten egg smells without using chlorine bleach?  A friend from church suggested I pour bleach down the well, but I want a permanent solution that doesn’t use chlorine.
We did have our well tested for bacteria, and its safe to drink, but the water has a faint smell of rotten eggs and it is really annoying.  We don’t get any rust stains and we really don’t have any other problems with the water, just the smell and occasional sediment.
Caroline F.
Georgia

For an inexpensive solution to removing sulfur smell in water and to avoid using chlorine, we can recommend the following Air Charge Sulfur Filter 5900 to address the odor problem.

It is a self-contained sulfur filter which uses air injection directly in the filter to oxidize the sulfur out, and then passes the water through a mixed bed of filtration media specifically designed to remove odors from water.

This is an automatic backwashing system that rinses out the media once per week, but draws in new fresh air on a nightly basis in order to keep the media clean as well as maintain a head of air for the oxidation and off-gassing of odors.

The filter is also a great sediment filter and will remove sediment and clarify the water. Since it is self-cleaning, there are not filters to change.  Every 4 to 5 yeas the carbon can be easily dumped out and replaced.
See how it works: 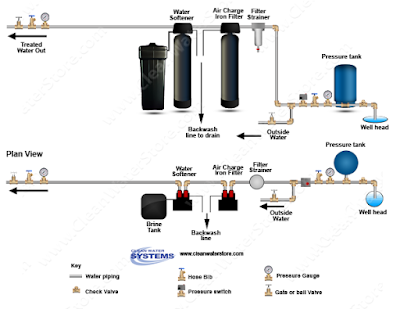 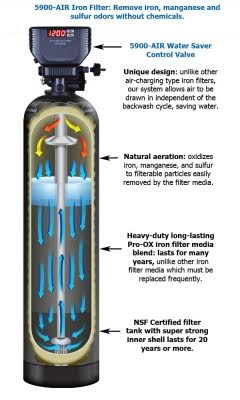 How the system works:  The AIO air filter maintains an “air pocket” in the top of the tank while the system is in service.  As water passes through the air pocket, iron and sulfur are oxidized.  The Nelsen AIO filter media bed then removes the oxidized iron and sulfur from the water.  Additionally, dissolved oxygen is added to the water.  By utilizing a patented piston in the control valve, the AIO Sulfur filter is able to put the whole oxidation process inside one tank, keeping maintenance costs and down time to a minimum.
Click here to know more about Air Charge Sulfur Filter 5900.